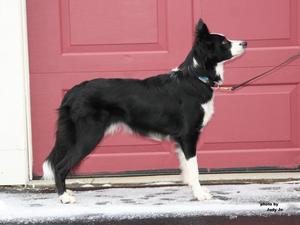 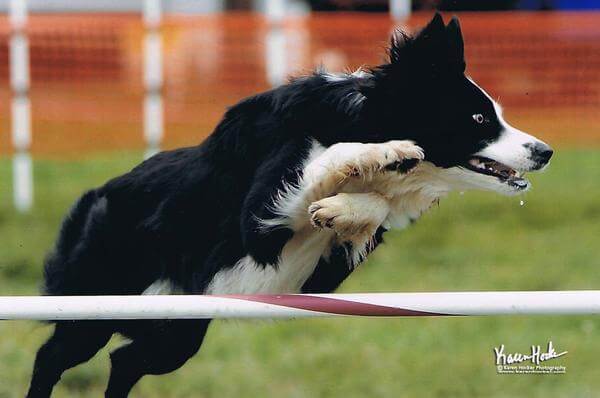 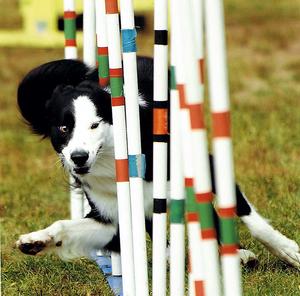 Verve Rocks is a multiple time finalist at USDAA Cynosport World Games as well as winning 20” Time to Beat at 2014 AKC National Championship.

This is what Catie has to say about Verve…

Verve is a beautifully balanced dog, both structurally and behaviorally.  He has an inexhaustible desire to learn, and a drive to match.  Of course his personality is what only someone who lives with him can really tell you.   He is such a steady dog.  Nothing fazes him.  He very seldom barks, settles very easily though would play with me 24/7 if I offered that to him.  He is absolutely the easiest dog to train I’ve ever had.  I would say, as much as a dog is capable of, that is how much he just wants to do stuff with me.  Teach me, teach me is pretty much his attitude all the time.  In agility, though he is a powerhouse, he has always been the greatest teammate.  Very much into doing exactly what I tell him to do.  Which on course is not always what I should have told him to do!  He is not a cuddly dog.  I think his feeling is that humans are here to interact in some activity with.  Hanging out on the sofa and being stroked while watching TV is not his definition of an activity.  But I’m a very on the move all the time person, so that suits me very well.  When I’m working in my office, he quietly curls up right by me.  But ready to leap up and go do something in an instant.  If he were a person he would be the impossibly handsome, smart and talented athlete.  If only he could command the salary our NFL stars do!!

He has been on sheep and has exhibited great innate talent for herding.  Which should come naturally to him as both parents come from very desirable herding lines.  Sire “Ken” is an import of Aled Owen’s breeding making Great Britain International Champion “Bob”  Verve’s grandfather.  Dam “Rhyme”  boasts impressive herding relatives also, with Great Britain International Champion “Sweep” as her grandfather.  Both Ken and Rhyme have consistently place in Open, and Rhyme was the Vermont Triple Crown Champion of 2008.

Above and beyond all that, Verve is just a great buddy and teammate.  I kind of like him, can you tell?

Want to be aware of new Agility or Dock Diving Classes, Planned Breedings, Events at the Dogs Place? Subscribe - we promise not to spam you or share your contact with anyone else! [mailpoet_form id="2"]
Holler Box